One of the greatest health myths of all time is that a vegan or vegetarian diet does not provide the body with the necessary nutrients it needs to function. This couldn’t be farther for the truth, vegetarian and vegan diets are associated with many health benefits. Vegan diets tend to contain less saturated fat and cholesterol with more dietary fiber. Vegans tend to have lower blood pressure, and have a lesser risk of heart disease. Sure, eliminating meat from your diet can increase the risk of certain nutritional deficiencies, but there are ways to get those nutritional benefits without eating meat, which eliminates the dangers that are associated with meat.
Many studies, published in top peer-reviewed journals point away from meat and milk as the building blocks for a healthy diet, and more towards whole plant-based foods with little or no added oil, sugar or salt. (1)(2)(3) In human population studies, rates of heart disease and certain cancers are strongly associated with animal-protein based diets.(1)  Plant based foods have plenty of protein and calcium along with far greater amounts of other essential nutrients like antioxidants and complex carbohydrates that you won’t find in meat and dairy products. Higher protein diets using meat increase the risks of cancer, cardiovascular diseases and other ailments.
Historically, the primary health value of meat and dairy has been to their protein content. Not many people realize that a plant based diet contains a large amount of protein, and that the protein from a plant based diet can be more nutritious than the protein from a meat based diet. Here is a list of 10 protein packed plants if you’re interested.  Casein (the main protein of cow’s milk) has long been associated with increased cholesterol levels and early heart disease. It’s also associated with other animal proteins in general, which have also shown to enhance cancer growth in experimental animals studies.(1) While we are on the subject of Casein, it’s important to note that it is the most relevant chemical carcinogen ever identified.
Basically, when it comes down to it there is information on both sides of the argument. Either way, it’s good to make sure your food is completely organic without any added additives or hormones. The main point I’m trying to get across is that you don’t have to eat meat, you can make the choice to be a vegan and be just as or even more healthy.
You wouldn’t ask a gorilla where it gets its protein from, would you? It’s all from a plant based diet.
Below is a video of vegan bodybuilder (one of many) Frank Medrano. He joins a growing number of athletes and bodybuilders who’s peak physical performance is powered only by plants. A growing number of people are becoming aware of the fact that we can live healthy lives without harming animals, and that it’s possible not just to live, but to thrive on a plant based diet. There is a large body of scientific evidence demonstrating that a vegan diet eating plant based foods, instead of animal based foods can have significant health benefits.  In 2009, the American Academy of Nutrition and Dietetics, the foremost authority of diet and nutrition recognized that humans have no biological requirements for animal products.(4)
There is no biological need to consume animal products, it’s a choice.

This image is a thumbnail only 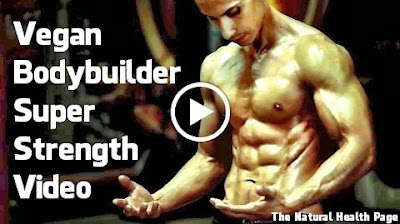